Staying in Shanghai and jumps into action, Vitamin C comes to rescue

The Chinese New Year came and went. People stayed home. The usual festivities were nowhere to see. This was the weirdest Chinese New Year that anybody had ever experienced in the recent history.

Pretty soon, the epidemic seemed to have escaped Wuhan and was spreading to other cities in China, including Beijing and Shanghai. The US Embassy started calling for evacuation of US citizens. My family in US was asking me to go home as soon as possible. I thought about contacting the US consulate in Shanghai for assistance to return home in Columbia. But when I looked at my parents, I saw in their eyes that they wanted me to stay.

My parents, especially my father, has developed a total trust in my medical opinion. Not just because I am his son. He has been benefiting from my anti-aging medicine approaches. Both my parents have high blood pressure. Years ago, their blood pressure readings were in 160-200/95-110 range, even with several blood pressure pills. Later I learned that the 2 basic mechanisms of hypertension is calcium related: blood vessel calcification causing the hardening of blood vessel walls and the constant spasm of the muscles around the blood vessel walls. Calcium is a major intracellular excitatory element, causing muscle cells to contract and the blood pressure to go up as a result.  My mother also had frequent symptomatic irregular heart beats (ectopic beats). Normally the cells at the sinus node in the heart have the highest frequency of cellular beats (excitation) (60-100 beats per minute). When the sinus node is excited (beats), the electric wave is sent through the entire heart, causing a synchronized contraction. All other heart cells can also get excited, but at a lesser frequency.  Therefore, normally the rest of the heart cells are suppressed by the supreme command, the sinus node. But in case the supreme command fails, i.e., sinus node malfunction, the heart cells next in line will take over and control the heart beat. This is a beautiful fail-proof design by mother nature (or by super-natural forces if you prefer). But if for some reason, the heart cells of lower rank get too excited and start beating more frequently than the supreme command, then ectopic heart beats happen. Too much intracellular calcium is a common finding in these situations.

I changed the blood pressure medications of my parents to long acting calcium channel blocker (LA-CCB) and magnesium. LA-CCB blocks the extracellular calcium from getting into cells. Magnesium is a natural antagonist of calcium. Magnesium is not a medicine.  With these two, one drug and one nutrient, I successfully brought down the blood pressure of my parents to the current 125-140/80-85 levels. And my mother doesn’t complain of “palpitations” anymore. With only one drug (LA-CCB, magnesium is not a drug), I achieved what several drugs couldn’t. I have also successfully treated many other hypertension patients and some of them were like my parents, even with several drugs, the blood pressure was still high. I have not found a patient whose blood pressure I couldn’t control.

In a recent physical exam, both my parents had coronary calcium score (CAC) done. CAC is a sensitive, safe, inexpensive and reliable exam for ectopic calcium deposits in the body. CAC also is highly correlated with mortality and heart attack: the higher the CAC score, the higher the overall mortality and heart attack risks.  My father has a zero CAC score and my mother has a very low CAC score.  We need to know that this is very unusual for this age group. The low or zero scores of my parents may have to do with the long time use of vitamin C and a formula of vitamins, antioxidants, mitochondrial nutrients and anti-atherosclerosis nutrients (what I call TotoCell Nutrition) that I have been giving them. This formula was devopled based on my integrative medicine principles. Of course, my parents are pretty happy about this.

Last summer, while I was visiting Shanghai, my father developed acute exudative pancreatitis, a severe and life-threatening disease. He was admitted to the ICU. I requested the high-dose intravenous vitamin C, which the attending doctor agreed, but only to 10 grams a day, not the 30-50 grams/day that I wanted. But even at this dose, my father recovered pretty rapidly. By day 3, his symptoms were all gone, and by day 5, upon my request, he was discharged home to be under my care. My father’s recovery from a severe pancreatitis was much faster than what most other patients of similar disease experienced, according to my literature search.

Through these events, my father developed a complete trust in my medical opinions, which are often different from those other doctors.

And now, with Covid-19, I could see that he wanted me to stay. So I stayed.

Knowing what I know about vitamin C (VC), I immediately started calling for early and high-dose VC use in the treatment and prevention of Wuhan pneumonia.

Over 20 years ago, when I was in my 2nd medical residency (I completed a medicine residency at Shanghai Medical University) at University of Arkansas for Medical Sciences at Little Rock, AR, where I also obtained my Ph.D. degree in biochemistry and molecular biology, I read a book about VC. I found the evidence was compelling at that time and started taking VC tablets.  Then there was only 500 mg VC tablets available, unlike today, you can find 1,000 mg VC tablets anywhere in US. My interest in VC grew even greater about 10 years ago, especially in the last 5-6 years when I read Dr. Tom Levy’s Primal Panacea and Death By Calcium. Dr. Levy is a board certified cardiologist who also received a law degree. This is reflected in his way of writing, scientific and logical. His books are like a supersized review paper in a scientific journal, conclusions backed up by evidence with lots of references.  His writings are very convincing. I even have translated both Primal Panacea and Death by Calcium into Chinese.

Do you know Vit C (or ascorbic acid) is one of the most studied molecules in the world? There are over 65,000 scientific papers written in the world’s biggest medical library, the National Library of Medicine, hosted at the NIH (better known as Pubmed.gov or Pubmed.com). So next time when someone tells you that there is not enough research on VC, tell them to do their homework better.

I know Vit C has powerful antiviral and antibacterial effects. Vit C has pleiotropic biological effects. VC is also a powerful prototypical antioxidant, boosts our immunity, has an essential role in the synthesis of collagen and is even involved in gene expression.  I’ll talk more about VC later, but suffice it to say, Vit C is a major part of our natural defense system against diseases. This now comes in handy, in the fight against Covid-19. I have always been open-minded. Ever since I was a kid, I was curious in everything. I used to take apart the mechanical clock at home to study how it worked before I was 10. I like to question everything. Unlike many other doctors who probably only read medical journals, I don’t take advises or standard treatment guidelines without my own analysis and digestion. Not only I wanted to know the “how”, I also always want to know the “why”. My interest in Vit C has been mostly in the prevention and treatment of chronic diseases, esp. in the prevention of osteoporosis and atherosclerosis.  Believe it or not, Vit C deficiency is a primary cause of osteoporosis and atherosclerosis and many other disease.  I’ll talk about this later, since the title of this series includes Vit C and integrative medicine. In the past couple of years, I have been invited to talk at various conferences in China and have made many friends and some of them are in the academia and public hospitals, with whom I share much in common, including VC.

I tried all I could to bring VC to the attention of the medical community and the people in power, as there was no other effective treatment for the Wuhan pneumonia patients other than the supportive care. I even volunteered to go to Wuhan, the epicenter, with only one condition that was to allow me to use high-dose VC both orally and intravenously.  When people asked me if I was afraid of the virus, I told them that not I was not afraid of getting sick, but because I have high confidence in VC.  I told them I’d give myself high-dose IVC daily in addition to taking oral VC to prevent catching the virus and to kill it and prevent it from becoming a serious problem, if I did catch it. My call for VC was sent to the top national expert team in Wuhan through 2 separate members on that expert team.  My call for VC also reached the Shanghai top experts and the leadership. There are a few hospitals that were seriously considering of inviting me to Wuhan, but after finding out my US citizenship, they all went radio silent.  I quickly realized this epidemic is not just a public health matter, but probably more  a political and diplomatic matter. 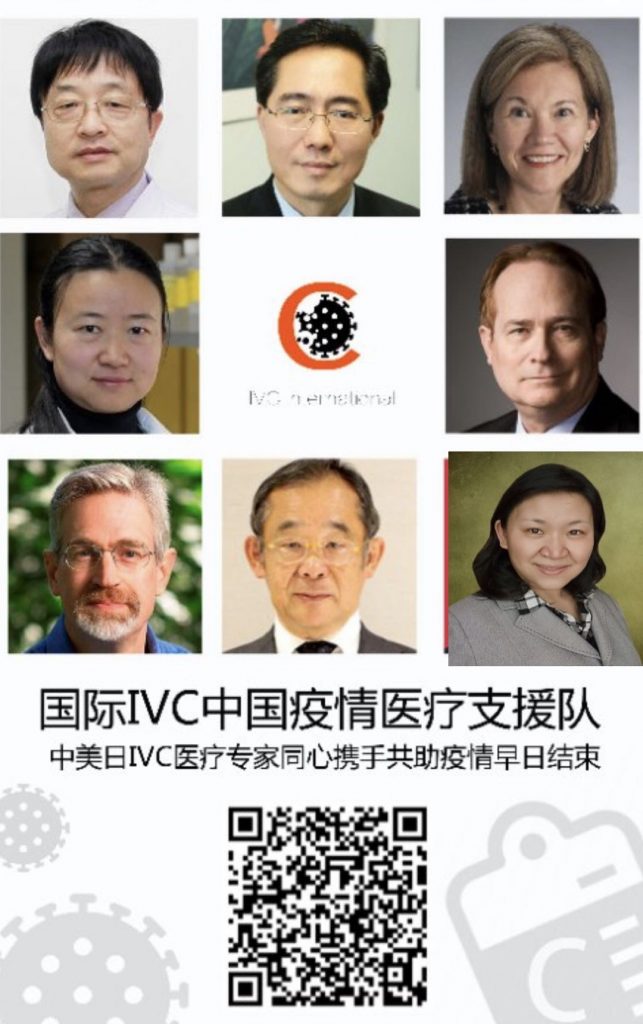 My call for VC quickly drew attention nationwide and even worldwide. Many doctors and scientists responded to my call and a team of International IVC Medical Support Team was formed.

This team includes medical authorities in China, Dr. Hanping Shi (石汉平), top left, professor and chief of surgery, Beijing Capital Medical University. Dr. Shi is the best known cancer nutrition authority in China and his team has been instrumental in promoting nutrition in health care, esp. in cancer treatment.  Dr. Shi also co-founded the Low Carb Medicine China Alliance, promoting healthy diet to combat the ever-increasing metabolic diseases.  Dr. Shi also holds many other important positions including the committee chair of the cancer nutrition of China Anti-Cancer Alliance and committee chair of the Enteral and Parenteral Nutrition Committee of the Chinese Medical Association and of the Anti-Cancer Alliance of China. Through these important and influential positions, Dr. Shi has been promoting nutritional approach to health care, including high-dose IVC in cancer treatment.